An insolvency administrator may contest and reclaim payments up to ten years after their receipt.

The currently valid insolvency law has a particular risk in store for companies: Even if your claims have already been paid, that money might possibly be taken from you again.

What exactly do you have to expect now? Court rulings are currently as follows: If one of your business partners or customers enters insolvency proceedings, the insolvency administrator will even scrutinize transactions that have long been concluded. If he arrives at the conclusion that individual companies knew of their debtors’ payment difficulties and might thus have intentionally secured advantages for themselves to the detriment of other creditors, the insolvency administrator may reclaim the payment – and this for up to 10 years prior to filing for insolvency proceedings. In the future, that period is to be reduced to four years but it will not be entirely discarded.

This will result in a risk that is extremely difficult to calculate: Despite payments already received and thus a successfully concluded business relationship, there is still the risk of being dragged into an insolvency case. Upon reclaiming, the claim is revived again and possibly enters the insurance cover again as if it had never been paid.

Claims having resulted during the term of the existing commercial credit insurance are and will remain subject of this policy. However, the claims are only insured in the amount of the limit provided. In case of an insolvency contestation, the problem regularly arises that the limit provided is no longer adequate.

Attorney’s fees may be additionally incurred because, according to the applicable law, you as the creditor must prove that you had not known of your former business partner’s impending insolvency (shifting the burden of proof). Moreover, the insolvency administrator will challenge everything that just seems suspicious – thus significantly increasing the value in dispute.

Time and again, we can see that the limits of a preexisting credit insurance policy are not adequate in case of insolvency contestation. Various providers have rolled out the contestation insurance for such a case. 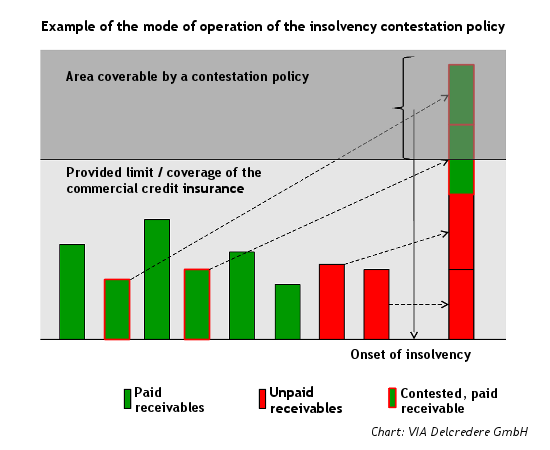 Such an insurance provides additional protection for insufficient limits in case of an insolvency contestation. With an additional annual fixed insurance sum, you can thus close a coverage gap for the claims insured by it, plus an attorney’s defense costs incurred. Such a policy can be concluded in addition to an existing commercial credit insurance by the respective provider, as well as separately from an existing commercial credit insurance.

If you want to have individual cases or your claims management tested with regard to a possible insolvency contestation, we would be pleased to provide you with the contact to an attorney specializing in the defense against contestations.